Hey everyone, I have been very distant from my blog the past few months and I wanted to explain why as now I feel I have the strength to let go of so much emotional confusion and tension within.

I would like to make all aware that I am forever thankful and grateful that I no longer have Cancer within this body of mine, not one point have a lost the gratitude for this however I have indeed lost myself through the process of learning  a life after cancer, because to me there is a life after but I believe you must learn to live with cancer and the scars it leaves you wit and this is where  you learn your very own peace process with cancer and you will indeed peacefully move forward, allowing the chaos which stormed into your life disintegrate little by little.

I wish for this blog to reach out to others who are perhaps having the same emotions, the same pain, the same loss and ultimately trying to regain balance in a life that has been affected by cancer.

No man’s land to me has been the hardest challenge I’ve faced on this journey so far.

I feel like I have been stood on a bridge of change with no idea how to cross it. I would look ahead and see storms, thick clouds, darkens, nothing appeared to be giving up and each morning I woke I would look so so hard to see if there was the light shining at the end of this bridge but each morning it seemed rougher the skies appeared thicker and the panic within grew larger. The bridge would rock and I would fall only to get back up and fall again. I wanted so bad to move closer and the more I seemed to want this, to need this, the more I became further away from where I was standing. I knew inside that I had to make it across, but I think I got so overwhelmed with doing so I lost patience in the process, thus leaving me baffled by my lack of emotional strength. I would daily ask myself ‘why’ why can’t I deal with this, I’ve dealt with cancer in my life, I found so much strength within me through chemotherapy and the daily grind of radiotherapy, I even found patience after surgery to allow myself to heal, so why now? Why now was I falling apart like a cheap watch, why now was my faith depleted and why was I losing myself to cancer all over again.

The pressure I put upon myself I can’t even begin to explain, I can’t express the inner turmoil, the confusion and my increased insecurity within in me for everything. My heart races as I write this because the feelings are of course still raw. I wanted to cross a bridge of change, I wanted to be me, and everyone close to me wanted me to be back to myself, but this felt impossible to do because I didn’t recognise myself so how could I get back to the old me. I had indeed spent months grieving for the old me, each infusion of chemotherapy took a little part of my spark away, but with this I learnt so much about myself, more than ever I did before, and the most ironic thing was I actually started getting to know the real me, this was where change rested, like a new relationship has its ups and downs of getting to know one another, understanding new boundaries, new feelings, fresh expectations, this was exactly how I felt about getting to know the me after cancer.

I was never going to cross that bridge as quick as I expected, darn expectations, I didn’t have the parts within to move forward safely, I felt halted and until the parts were repaired, and new parts fit, I realised suddenly that it was my time to stop. Maybe so much strength when you are fighting hard you forget that the other side of strength is pain, and to believe that doesn’t exist, to feel that you should be so grateful you can’t face or feel this pain, is dangerous and will tear your soul apart.

My months haven’t been plain sailing they have indeed been filled with wait, with concern, with new worries. More scans that were not on my ‘to do’ list after cancer would throw me backwards without any warning, so much so I totally forgot about my ‘to be’ list. In fact, the bridge of change which I was trying to cross wasn’t the same as before, the storm had cleared but the end was nowhere in sight.

The rude awakening that cancer is a creepy mother trucker, and catches you in its web when all you want to do is forget it even happened and get back to normality, the realisation it doesn’t just happen that way for someone so ‘proud’ like myself is crippling.

We are creatures of comfort, change is scary, change after 33 years of being something is unsettling to say the least. But acceptance of change is the only way of ever crossing that bridge, if you don’t accept it you will stay on the wrong side of change and not see the beauty which lies on the other side with open arms waiting for you. It’s there, its waiting patient, its calm, its warm, it’s kind and it’s safe. It’s you. It’s the you which you deserve, your gift greater than anything anyone can give you, greater than anything money could buy you, and it is all waiting the other side of that bridge for you.

The storms, the clouds, the darkness was the view I felt I deserved, this was my emotional pain working against me and winning, this was a living nightmare when actually reality had something different in mind, reality was good, and change was the most precious gift I would ever become.

Nothing worth having comes easy they say, and the same could be said for my life after cancer. I believe that I was tested, I believe I tested myself, and without this test I wouldn’t have been able to pass with the peace of knowing that I had felt the pain, I had worked so very hard to get across, to make it to the other side of my change, my world.

Change is scary, change is different, change will test you and change will make you question every little thing in your life, but it won’t defeat you.

I hope you can cross too, don’t pressure, don’t push yourself too hard, take care to find the right parts and place them carefully, and remember this is your story, you decide where it goes, and when you feel you are failing find that little part of you that loves you back more than anything in the world, and allow that part of you to re fuel your fire and passion for life, never let it go out and when it feels like it has, I can promise you, it is still burning away within waiting for you to find it once again.

One thought on “The bridge of change”

A Little About Me 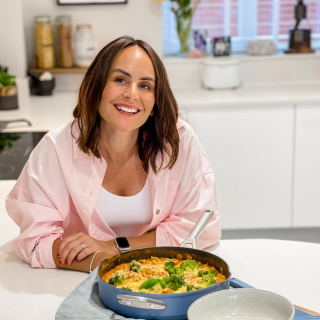 Hey Everyone, I’m Sarah Dixon a passionate plant based food blogger. I am a Breast Cancer survivor with an overwhelming passion for this thing we call life. My world turned upside down but as it did I found my passion, Nourish Flourish Me, my blog. My aim is to inspire others to eat and enjoy more plants in the process showing you some super simple recipes. Cooking is my therapy and I hope it can become your ‘time out’ also. Love Sarah xoxo